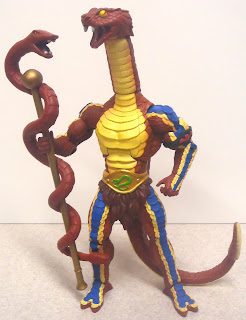 I had a bit of great satisfaction when I opened this newest version of King Hsss's Snake Man General, Rattlor. When I first saw Pixel Dan's review of this action figure, I knew that I wanted him in my collection. This action figure is fantastic!
To start off, this toy, as with most all of the Masters of the Universe Classics action figures, is chocked full of articulation. You have a ball jointed neck; ball-hinged shoulders and hips; hinged elbows, knees, chest and ankles; and finally swivel waist and wrists. To add to this long list of movement, he also has a swivel tail much like that of Whiplash. So needless to say, this snake man is pretty poseable. One incredible thing about this toy has to be the paint application. It is truly beautiful. There is so much attention to detail that I would have to think that elements of Rattlor were in fact hand painted. The maroon is very vibrant and works so well with the yellows and blue, just like the original release of this character.

Rattlor comes with his snake staff, an Evil Horde armband, and his neck extension. I like how they paid homage to the vintage and 200X toys with keeping the Strike like head. 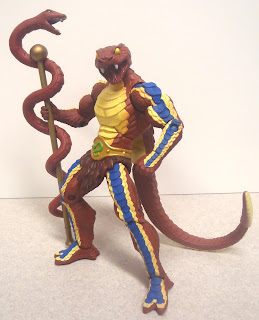 That's leaves the way you want to display your toy with a couple of options. I personally like having his neck extension on the toy. I really makes him tower a bit over all of the other Snake men that have been released so far. 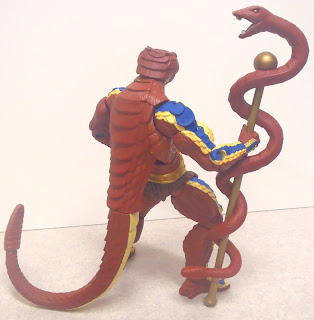 The tail has a rattle in it to harken back to the original release Rattlor that had a rattle in him. It makes sense; he's a rattle snake. The only problem I have with this rattle is that it is really quiet. Is that a big deal? Nope. Again, overall this action figure is great! Now I know that there have been some problems with some of the recent MOTU Classics toys having the paint rub off to show black plastic. I've seen a little paint peeling up from the ball joint of the neck extension. Other than that, I've had no problems. Now Mattel has said in passing that we might get the 200X armor for this action figure in a battle pack. I'm not too keen on getting the battle packs, but I might be tempted to get it just to get the armor. You can find this guy on amazon and ebay for about $40.00. Normally I would say just to wait to see if Mattycollector re-releases him, but if you want to drop the dollars for this guy I would understand. He's that cool.

All throughout the month of Movember, I'll be growing a mustache to raise awareness of prostate cancer and I'll be taking donations for the Prostate Cancer Foundation. Do you want to donate?! Head on over to my Movember page to see photos of me struggling to make a blonde mustache show and to donate!

Give us a like! And, if you like what we have, be sure to tell your friends! We need your word of mouth to help us keep making shows!
Posted by Taylor Lymbery at 5:13 AM