Back on board with Xenex...or is it Xenex back on the Board? 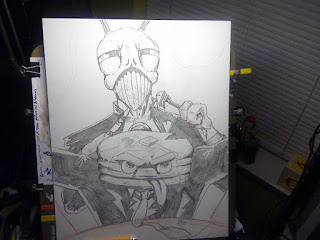 Dear Xenex the Bug Man fan,
Low grumble.  Low, unsettling, loud moaning grumble. I swear that that is what I imagine from Xenex fans. What is the low grumble, displeasure. Not displeasure with the comic, but unhappiness with the time in between issues. All I have to say to that is, "I'm pretty displeased with my "Apparent lack of progress"(as disguised in a bad Vader voice) as well.  It's true. On some levels, I have done the Bug Man fans a mighty wrong in making you wait so long for an issue. So, to satiate your Xenex story hunger, I am...finally... writing and working out the kinks to the extremely delayed issue 4. I say this, and this time I absolutely mean it!
So you may be asking, "What has taken so long?" Well, I have no excuses to give you; only reasons. The biggest reason, life. My job brought me in for more time than what I had planned,  I moved, and I over-did the promised art pieces. Also, I had a little too many Saints Row the Third Co-op play dates with my Best Friend Matt Kernan over at Video Game Hangover. I know that those sound like excuses, but they are in fact some truths to this reason of life getting in the way (well except for the Saint Row). And honestly, these are things I need to learn to work around as I have done in the past. My hope is to one day be able to work on this comic and others without having certain aspects of life get in the way, but till then... I will have to say to those who have stuck with me and the comic for all of this time, "Thank you". You have no idea what your voice and support means to me!
You know I had said that over promised art pieces was a problem. Not too true, that statement. In fact, I have a Xenex character mash-up with the original character, Flapjack from a fellow deviantart friend, Larry King! Head on over to his DA page and check out his fun comics!
So, again, thank you for sticking with me, and with Xenex the Bug Man. Hang in there because I have more twist and turns and fun in store for this story. And, if you want to help, and you want to help SO BAD, repost this on your facebook page, or tell your friends about the comic, or"Like" the Xenex the Bug Man facebook page; in general help me get the word out to everyone. If you like what you are reading in the comic, let the world know.
Sincerely,
Taylor Lymbery
Posted by Taylor Lymbery at 9:31 AM No comments:

Back at it! (The Studio is back to functioning) 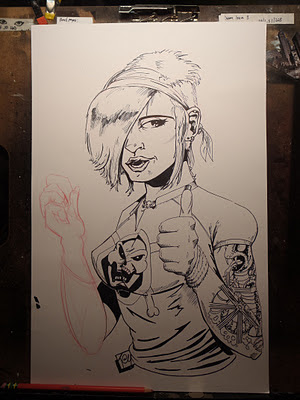 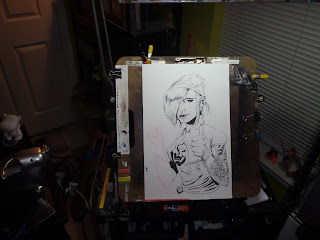 So the last time I posted was me complaining about the fact that I was leaving the apartment for a house. All in all, I did lose about a 1x10 foot area. (The size of the rooms differ by about that much.) But, I cannot believe how excited I am to be here in this new place! One of the things I was able to do was build shelves that go high, to display my toys and books. One exciting thing about this new place is that I laid linoleum tiles, so I can move my art carts around. I'll post pics of the studio soon. But, to pay respects to the move out, to move in, I finished up a Pin-up girl while I was still there in the apartment. I did another, but she was drawn there and finished here in the house. So, I figured it was about time to do another pin-up girl, the first completed, in the new studio. I'll keep you updated on how she goes. So far, I have her all inked except for her right arm. Right arm, man. Right arm.

Also, to keep you updated on the Sci-fi Expo. I will be there. I'll have the Cowboy Clone Trooper pin-ups still. They are going to be $5. I have about 50 of them left. And then that's it! Also, I'll have 11x17" posters there of Sarah the Pin-up girl, Miranda Fly Girl, and Power Meal Rangers. They will be $15 each. I will have 20 of Sarah, 18 of the Rangers and 10 of Miranda. Oh, and I'll sign them for FREE! I'll also have a small stack of Xenex issues form 1-3 and I believe the Giant Sized issue of Unstoppable Force. I don't know the prices on them just yet. I'll also have color sheet sci-fi characters like the FanDays show back in October. So, mark your calendars for February 11-12, 2012. And please, please, if you go, come by and at the least say hello. I think I'll be manning the booth by myself this time and I'll be lonely. :(
Posted by Taylor Lymbery at 9:23 PM No comments: