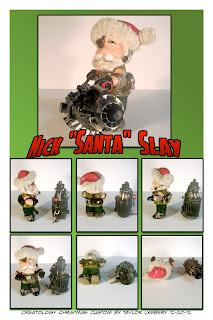 Every winter, Nick Slay, codenamed "Santa" goes out to battle the evil doings of Iceman and his penguin henchmen! Armed with a Heat Armament Ray (H.A.R.), "Santa" truly slays the icy grip of death to protect all the nice children of the world!

When I saw that Creatology was putting out a whole series of Christmas based DIY Vinyl action figure kits, I decided that I should try my hand at some holiday goodness! Here is the first in a small line of action figures in my custom toy line named, Slayed. Overall, I am very happy with how this toy came out. His arms unfortunately do not move. They had to be glued into place because of the cracking that had started occurring in his elbow. His head does turn, but is limited due to his beard. His massive weapon does come out of his hands. It is made from various plastic objects pulled together to make a crazy oversized sci-fi weapon. I did get a second DIY Santa action Figure to do another version of Nick "Santa" Slay. I will work hard to make sure that that version of Nick's arms will move. Now, I've got some important updates, so more pictures will be at the end of this posting. Enjoy the pics. I've got to get back to illustrating comic books! :)

Give us a like! And, if you like what we have, be sure to tell your friends! We need your word of mouth to help us keep making shows!

Now here's some Pictures of Nick "Santa" Slay!
Posted by Taylor Lymbery at 4:52 AM