It's all in the numbers! The racial diversity in MOTU is so... so small. 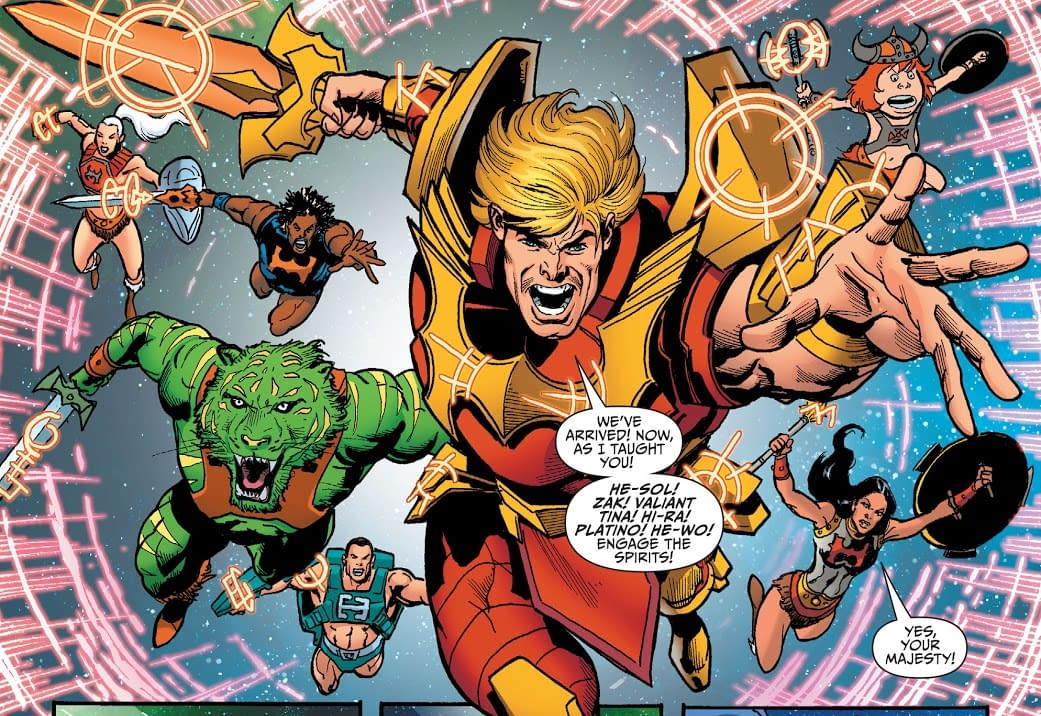 How racially diverse is He-Man? Have you ever wondered? I have, and in the wake of studying just how diverse, or not it can be, I've shaken up some of the Masters of the Universe fans as I have been working on a push to racially diversify the upcoming Masters of the Universe Origins toy line. Wait, before anyone gets worked up just yet, I'm not wanting to change the race of He-Man himself, though that could be very cool. Some fans of the MOTU Nation Facebook page have suggested this idea in a negative way in their comments. I don't see anything wrong with it, but their are some that are angered. What I'm wanting to do, is to add humanoid characters that are heroes of color. On the group page I had some people who shouted insanity due to the fact that we did have Clamp Champ, a Black hero in the original toy line. Yeah, we did...one and he came at the 6th wave towards the end of the line. Almost like an racial equality grab at the very end of a franchise. And with some of the backlash over my petition to diversify the new Masters of the Universe Origins toy line, it made me think. What are the numbers for people of color represented in any of the He-Man toy lines. Let's take a look. 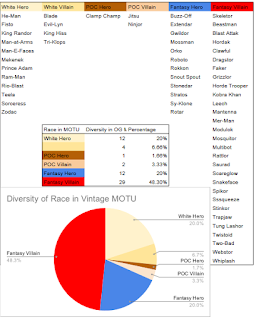 Above is a chart for the Vintage 1980's run of Masters of the Universe toys. I broke down the line based on how many original characters were made into action figure form. I did not include and giants, but if I did, it would be one green mutant giant that is a bad guy and one hero giant that is white skinned. That Seemed kind of unfair to the information collected. From the data, the only racial representation of people of color (based on  Earthlings, you laugh, but mutants apparently spell out diversity of race for some members of the MOTU Nation group on Facebook) is one hero and two villains. The hero, Clamp Champ, is a Black man. The two villains are of Asian decent and both have a stereotypical idea about what is thought of the Asian cultures in white media, especially in Reagan era television. These two characters are a Karate fighter (Jitsu) and a Ninja (Ninjor)...go figure, or in this case, action figure. The only other character that was a question was Evil-Lyn because she is human like with yellow skin. But, seeing her in the cartoon basically places her in the pale white skinned category...so white. Let's take a look at the He-Man or New Adventures of He-Man that started in 1989. Will it be more racially diverse? 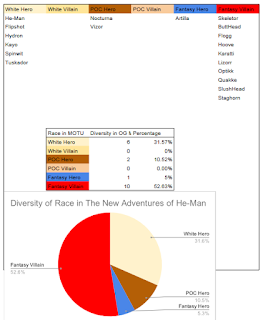 Above is the chart for the New Adventures of He-Man. Looking at the data, you would think that this is truly more progressive, but in truth we still only got one Black guy (Vizor) and one Asian man (Nocturna). Nocturna is a bit of a stereotype with him being a Kung Fu style master. The progression seams to be that this time no negative representation of people of color as villains was in place. But to be fair, neither were whites. There was a smart move in this line to make the bad guys all mutants and monsters. I'm sorry, if you are a monster, alien or mutant creature. The line ultimately ended due to fans not liking it from its redesign. In 2002, Mattel relaunched the Masters of the Universe toy line. It was updated in its sculpt and look. It is a small toy line and there were several fan favorite action figures that we never got made as actual action figures. Instead, we got those favorites as a small action figure sized statue. That's right, a non-moving plastic statue for collectors! In a modern telling of the series, let's take a look at how racially diverse is this toy line. 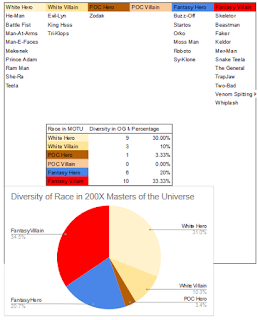 This run has one person of color...one. It's a small line, but it seems that the lack of representation hasn't changed. Mattel never got to finish it's run as planned, but I see no push for racial diversity in the roster. No new characters. It truly is the same ole' stuff. And the line didn't run that long. It had an amazing cartoon, and powerful Black man in a previous white role that now has created a whole new powerful character, Zodak! But, all in all, a big fail on racial diversity. Now, Mattel decided to bring Masters of the Universe back in 2008. This line was called Masters of the Universe Classics and it was massive! It is the biggest roster of characters to date for the He-Man property. I started really getting back into collecting MOTU again because of the launch of this toy line. This time, we would see characters from mini-comics, cartoons, and newly imagined people. Let's take a look at the data. 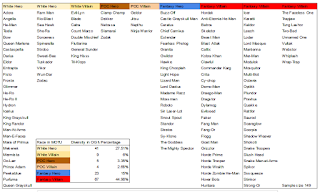 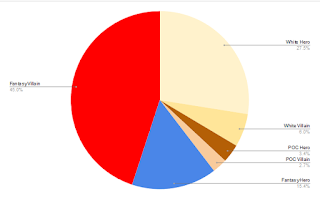 Keep this is mind. Out of 149 unique characters, there was a 27.5% chance of it being a white hero. There was a 3.4% chance of a hero being a person of color. And when I say person of color, I am including all races except white. There were 4 Black heroes, and 1 Asian Hero who's face was covered in a white ninja outfit. I guess white signifies purity and being a hero even though he is in a ninja outfit and ninja's were assassins... Ok, I've gotten a little off topic. Think the numbers through a minute. Out of 149 characters made, 5 are heroes that are a person of color. That's it. And from looking at the data, there were 41 white heroes made. In a line so diverse as I have been told, I'm astonished. Mattel created characters, and yet, we are still dealing with this issue. And it has taken me researching this to really understand the gross lack of racial equality in the MOTU toy universe. You know I have, cause you can see it too! You're welcome by the way.

At this point, you might be asking yourself, how in the world did this guy start this? I was watching a video that Ed's Retro Geek Out was showing. It was a video on knock off Masters of the Universe toys. In that video, He talks about Olmec toy's, "Sun-Man and the Rulers of the Sun" toy line. Then, my best bud, Jeff sends me a link to a video also about the line. I saw a strong He-Man like Black man that used intelligence and empathy to battle ignorance and greed. This was Sun-Man! I had to know more. I learned about Yla's story in the Washington Post.  "Yla Eason (pronounced Y-la) received inspiration from her 3-year-old son to create a line of black toys for boys and girls. It was her son’s declaration that he could not be a superhero because He-Man was white that prompted Ms. Eason to make a change in the toy market and in her son's mindset.", says Debbie Behan Garrett in her 2010 artical on Sun-Man. I felt motivated and ready to help make a change. Knowing that Mattel was relaunching, yet again, the Masters of the Universe line, now called Masters of the Universe Origins, I felt that now was the time to act! I created a petition and I have been spreading the word. Now the good message doesn't come without backlash or blind ignorance from those who think it is stupid to add heroes of color into the upcoming toy line. I have been mocked and made fun of on the group page, but I will take it to diversify a beloved toy line so that no child of color in America will think that they can't have the power, just as He-Man and the Masters of the Universe. If you would take a moment and open the link to my petition:

Read it over at the very least. Start thinking it through. Sign it, and share it. And when you share it, use the #DiversifyMOTUOrigins so we can find it all over the internet. The numbers in the graphs above are sadfor racial diversity and it's time for all of us to change it.


Jeff and I are having an 8th anniversary of our show, Talking Toys with Taylor and Jeff! It has been a great ride. Celebrate the occasion by going through our backlog of shows on MarvinDogMedia!
Posted by Taylor Lymbery at 6:08 AM