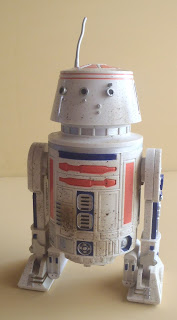 Back in 1996 or so, I managed to muster up enough money from my after school job to buy this 6" R5-D4 from the Star Wars Action Collection 12" toy line. At that point in my life, anything Star Wars was going to be bought by me as long as I could find the money for it. There were times that I wouldn't buy my school lunch in order to have just enough money to go buy a Star Wars toy. In some ways, it makes no sense, but I was hooked! The Astromechs from this 12" line were sculpted really well. They look fantastic and feature the essential articulation. I've got to tell you, I'm not a big fan of the droid, but I have kept this action figure all of these last sixteen years due to the fact that I really like this toy!

As far as articulation goes on this toy, he has a swivel head (expected), Swivel legs (ok), swivel ankles, a pull out center foot and little teeny tiny rollers on each foot. The fact that this is a astromech droid of some sort, I'm not expecting a load of moving parts. I would have liked to see a "pop-out" motivator part for his head. That way he could have a "bad motivator" as Luke calls it when this droid is on its way to Uncle Owen's moister farm. I could just make a motivator and put it where the antenna is. You know, I honestly don't remember this droid having an antenna in the Star Wars movie.... Now that I have done my research, I now know that the droid has an antenna. You can kind of see it here. Enjoy some pics of my R5-D4 from my personal toy collection. 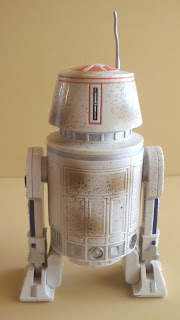 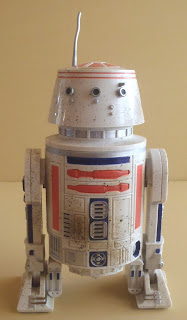 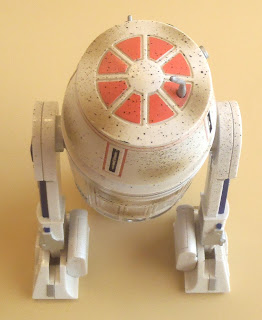 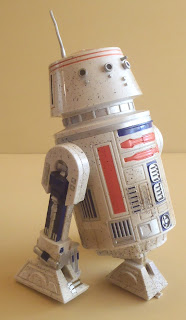 
All throughout the month of Movember, I'll be growing a mustache to raise awareness of prostate cancer and I'll be taking donations for the Prostate Cancer Foundation. Do you want to donate?! Head on over to my Movember page to see photos of me struggling to make a blonde mustache show and to donate!

Give us a like! And, if you like what we have, be sure to tell your friends! We need your word of mouth to help us keep making shows!
Posted by Taylor Lymbery at 4:26 AM