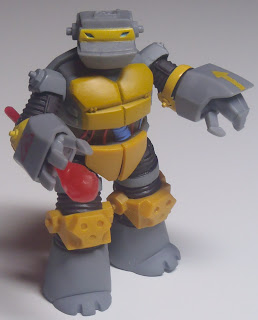 After all of these years, I finally got a Metalhead from a Teenage Mutant Ninja Turtles line. I think the wait has been well worth it, cause this action figure ROCKS! Let's take a look, shall we.

This new version of Metalhead has been featured on the 2012 Nickelodeon Teenage Mutant Ninja Turtles cartoon. The episode that he is on is, well, Metalhead.  The title definitely gets to the point. But enough about the cartoon, this is about the toy. I picked this guy up recently with some birthday money. I had decided for a while that I wanted to get one to put with my collection of Turtles.

This guy does have some disappointing lack of articulation in areas, but picks up the fun factor in others. Articulation wise, he has a ball jointed head, swivel shoulders, swivel wrists, ball hinged thighs, ball hinged knees, and swivel calves. That's a good bit of movement. Where this toy disappoints me is the swivel shoulders. I would have liked to see a ball hinged joint in the shoulders to give a bit more articulation like the Turtles in this line. I think that would have still worked with the fireball projectile action feature which is a stick projectile in Metalhead's arm hole that you thumb out. I could actually have done without this feature being here and would have maybe preferred a snap on missile launcher instead and ball hinged shoulders. Are you listening Playmates? 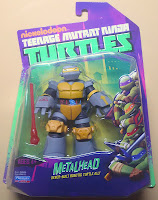 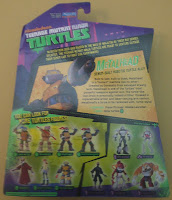 As far as packaging, Metalhead is the same as all of the characters in this line, though he has a variant due to package. The variant is a mistake on the package. In the action figure line-up, Michelangelo is show as Raphael. That's it! I don't think the mistake package is rare. I found two when I went out to get my action figure. 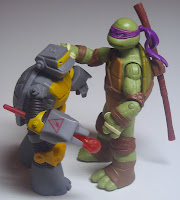 Overall, I think this toy is a good addition to the new TMNT line. I am very happy to have him in my collection and I could see this action figure being a load of fun for kids.

All throughout the month of Movember, I'll be growing a mustache to raise awareness of prostate cancer and I'll be taking donations for the Prostate Cancer Foundation. Do you want to donate?! Head on over to my Movember page to see photos of me struggling to make a blonde mustache show and to donate!
Just to let you know all know, I am taking commissions. If you would like to commission me for original artwork, head over to the commissions tab in store to see how.

The long awaited issue 4 is now up for order. It's a great looking comic book! Head on over to the Bug Man site and see what I'm talking about!

Give us a like! And, if you like what we have, be sure to tell your friends! We need your word of mouth to help us keep making shows!
Posted by Taylor Lymbery at 6:10 AM