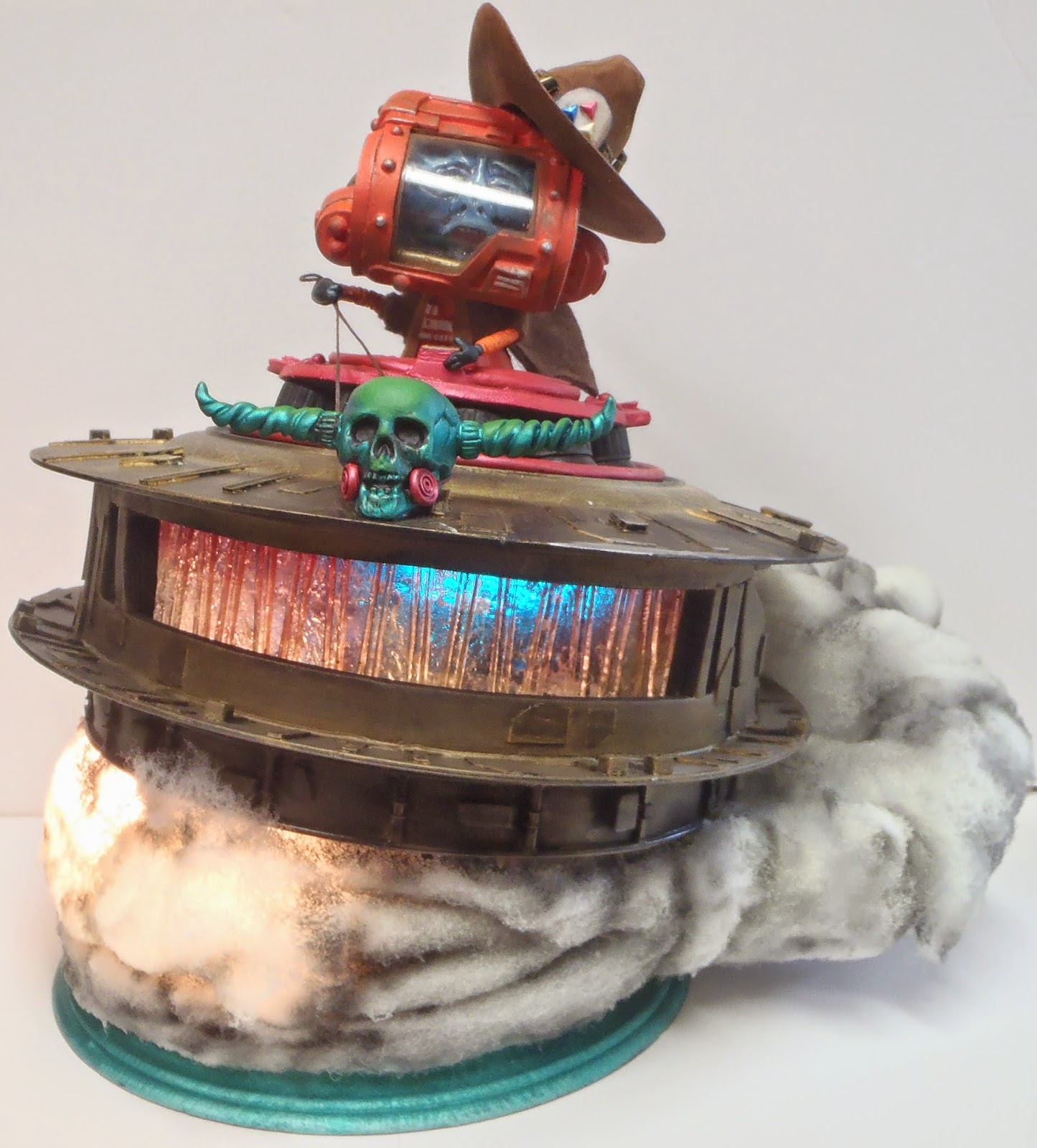 I had another awesome year with the Vinyl Thoughts Nation at the Vinyl Thoughts Art Show 5! This year, VTAS had based the show around the Mad'L vinyl designer toy. Galatic Giddy-up here was my Mad'L piece. I went a little over board! I really wanted a piece that would stand out. Although it was not plugged in for the show, I have seen a lot of instagram pics of it out in cyberspace. This piece was created using two plastic candle chargers, a strobe light, some crafting foam, christmas lights, sculpey, paint and a lot of love. When the look of the piece was done, I did have a bit of a struggle keeping the toy from overheating. The toy would heat up and the strobe light turn table would seize up and stop moving. I eventually got that all fixed up when I changed the bulb in the strobe light to an LED bulb that would cut down on the heat. I also added some vent holes in the back that looked like they belonged to the ship's design. Once I did this, the toy would run for hours without having to be turned off. Now the toy did not sell at the show. It's a big piece. It is listed on the Vinyl Thoughts Nation Storenvy site for pickup only. I love making big pieces, but for next year, I might just keep the toys small.

I'll have more pictures after the wordage below... as always!


Recently, I was being filmed for a convention documentary called, Unconventional. You can see it here. While you are at it, you should check out Johnathan Paul's other video work here.

I have opened a storenvy.com shop to sell my toys. Here's the link: http://taylorlymbery.storenvy.com/

If you have not heard about the Podcast called, "Talking Toys with Taylor and Jeff", then it's time I let you know! Jeff and I are on the show where we talk about toys! (Go figure, I mean Go action figure!) Seems simple enough. We pick out a toy line to discuss in each show. We share our childhood memories, our favorite five, and talk about the one toy in the line that got away. Jeff talks about how he cherished his toys and I talk about how they ended up in the garden! The other show is The pilot episode, where Jeff and Cory break down the Pilot Episode in TV series. The shows are great! If you are interested in what we got, go to Marvindogmedia.com  and give us a listen. You can subscribe to the shows on itunes and get up to date info on upcoming shows on facebook:

If you like what we have, be sure to tell your friends! We need your word of mouth to help us keep making shows! 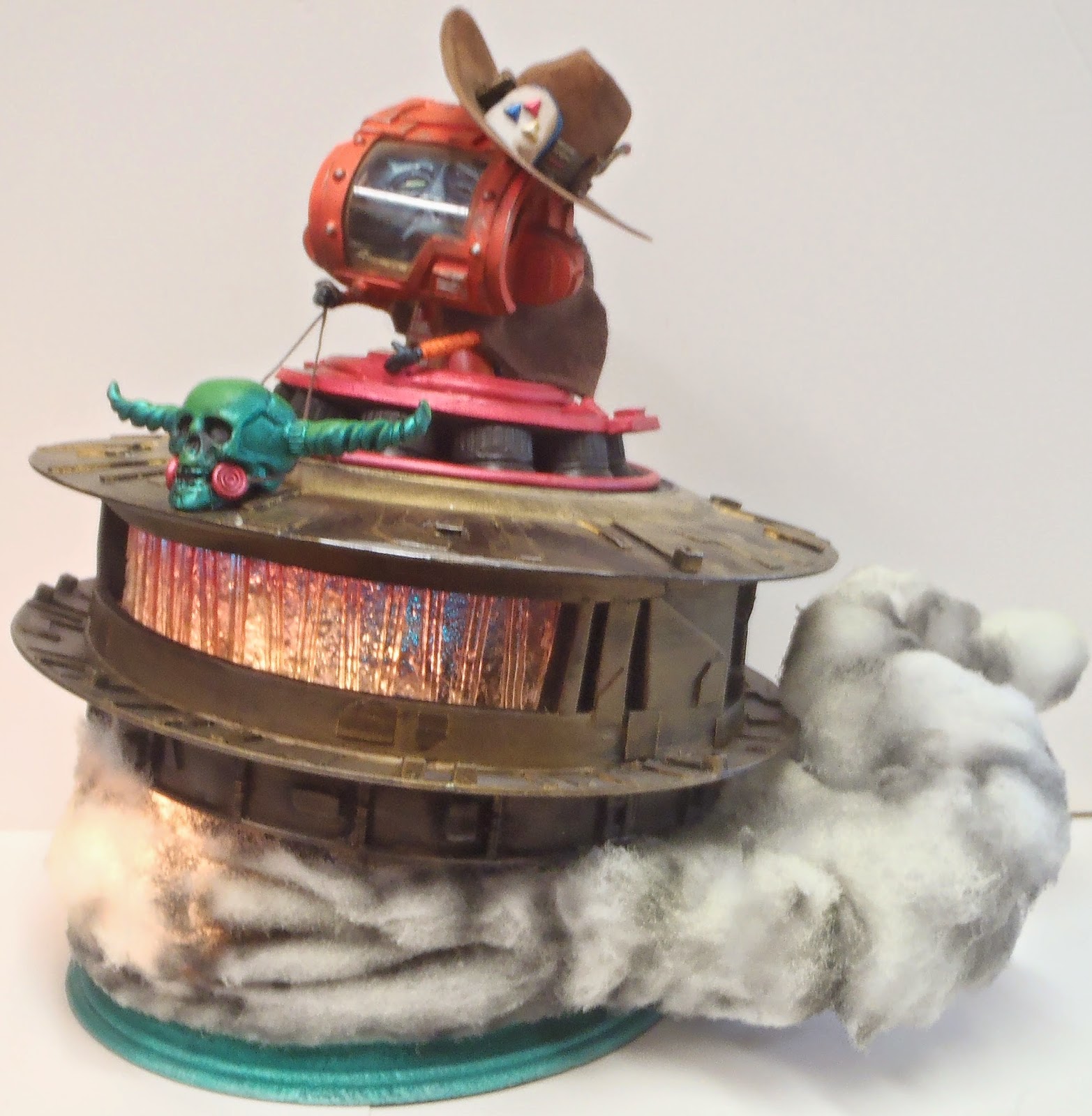 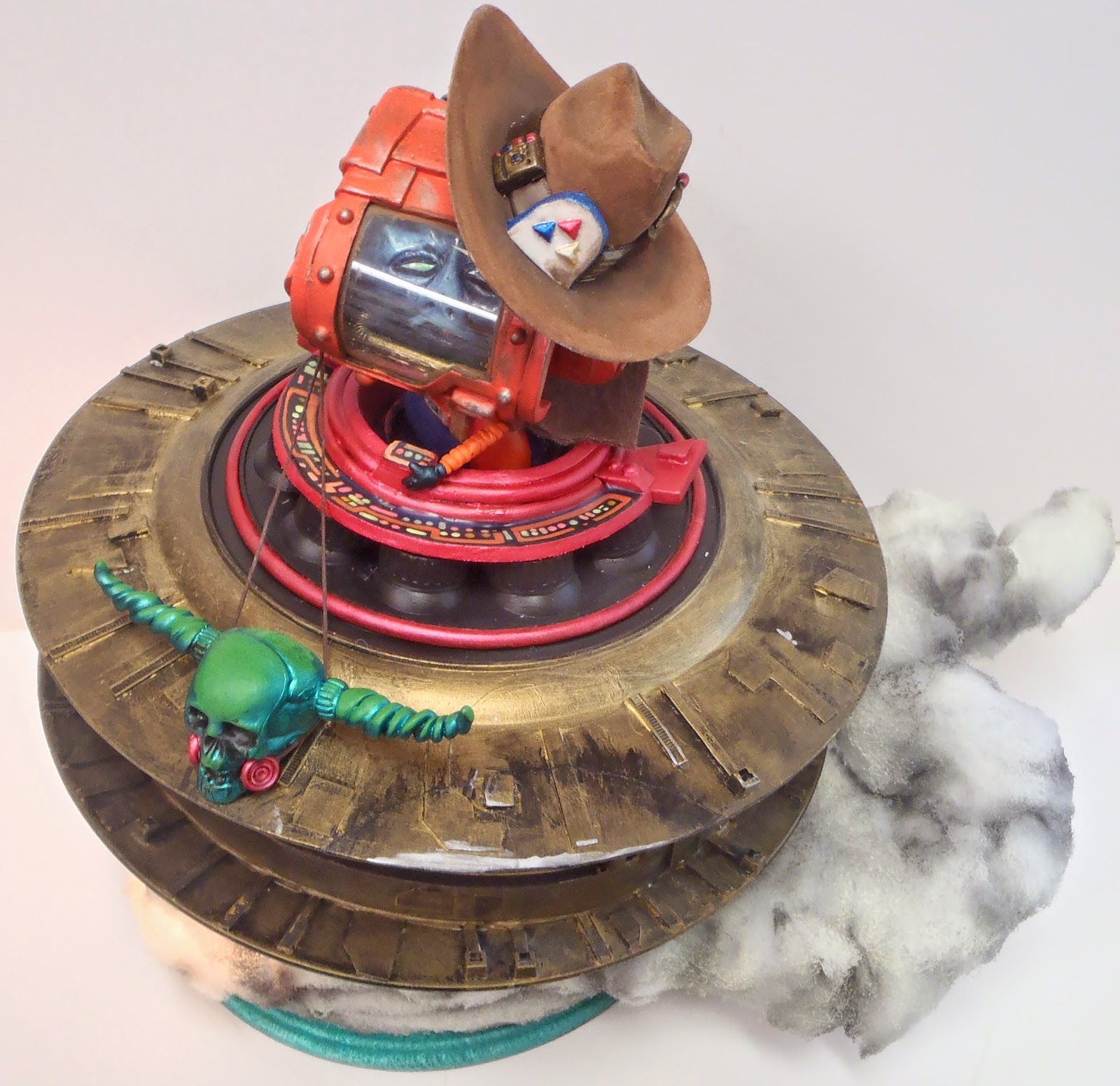 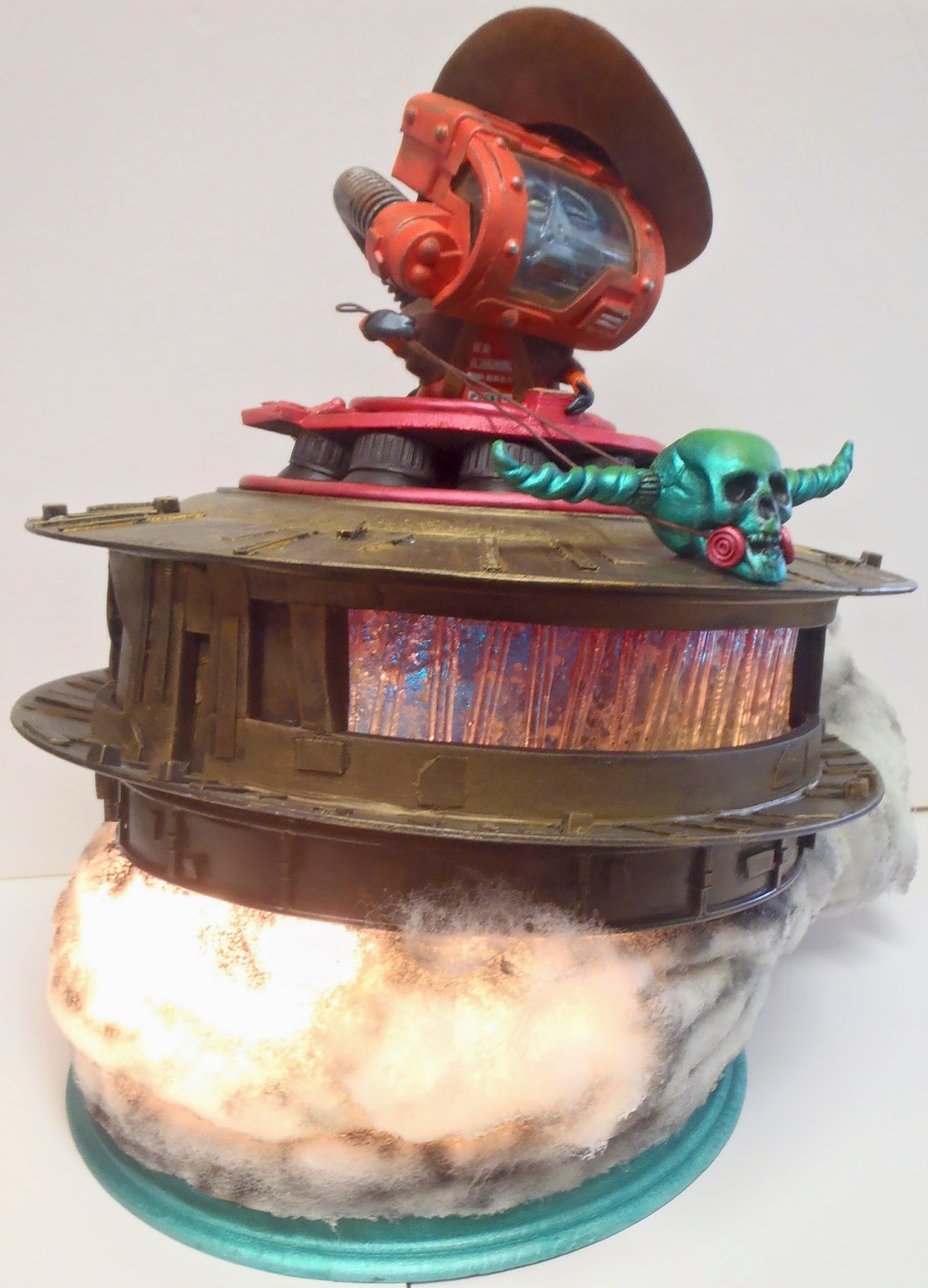 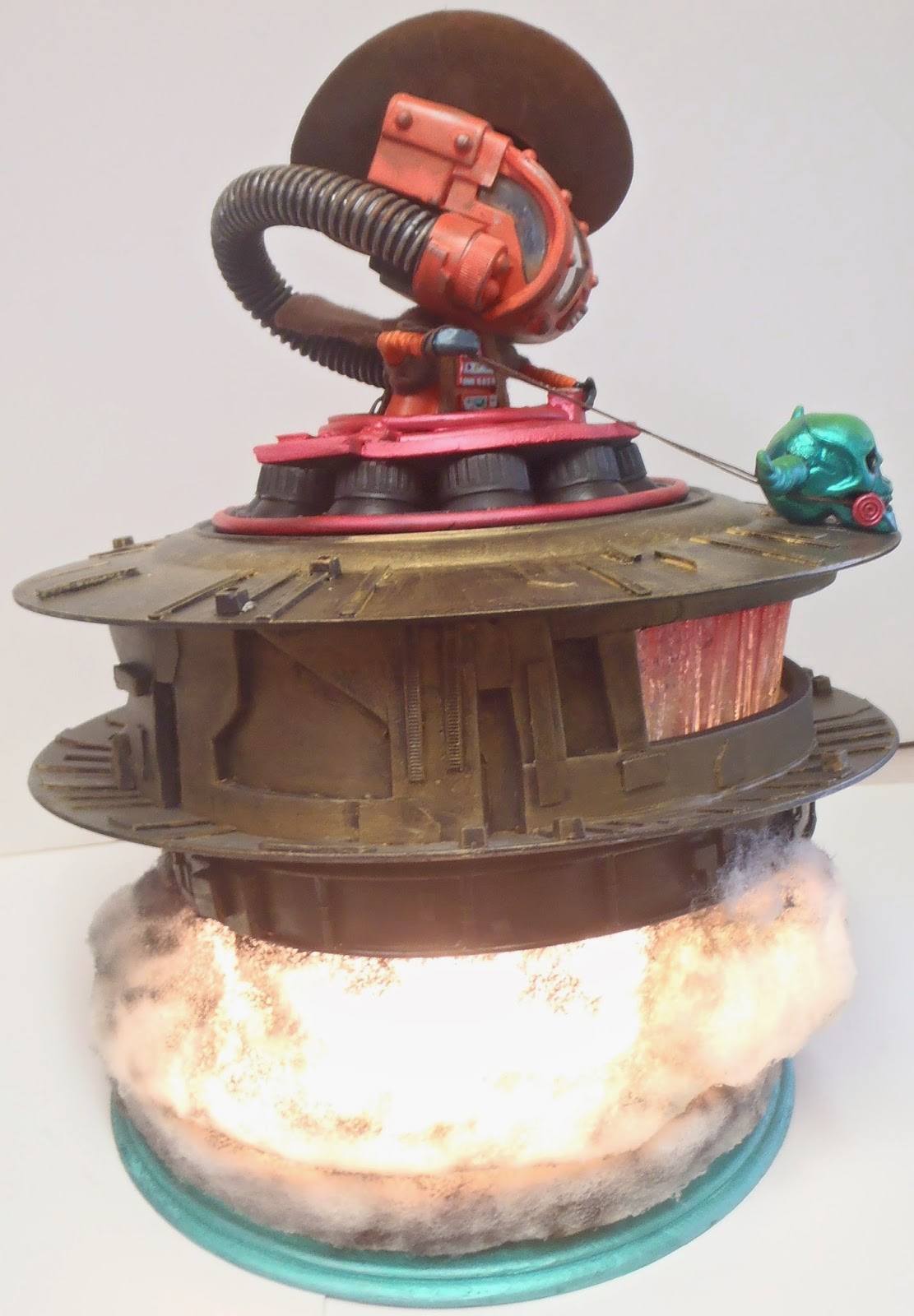 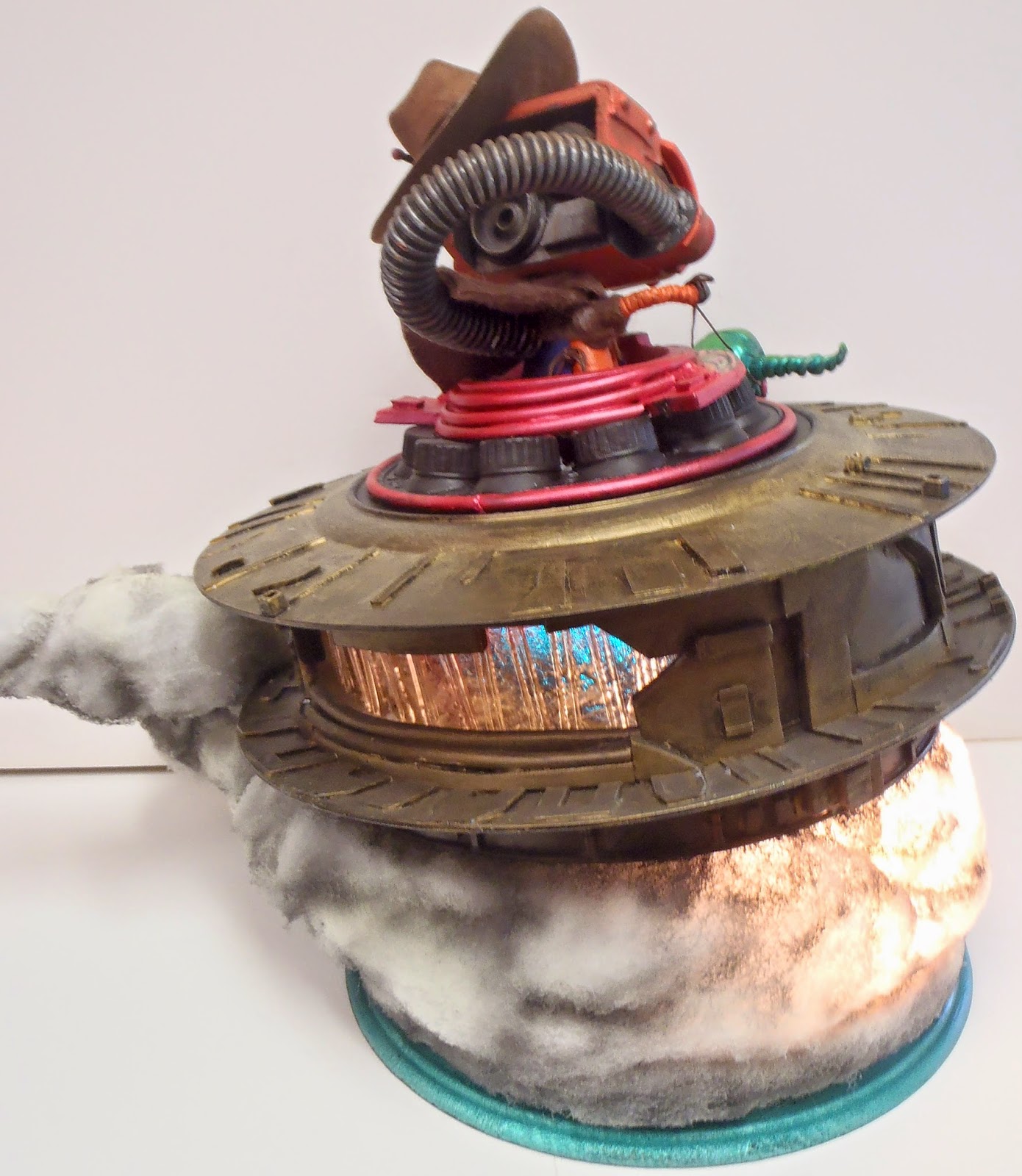 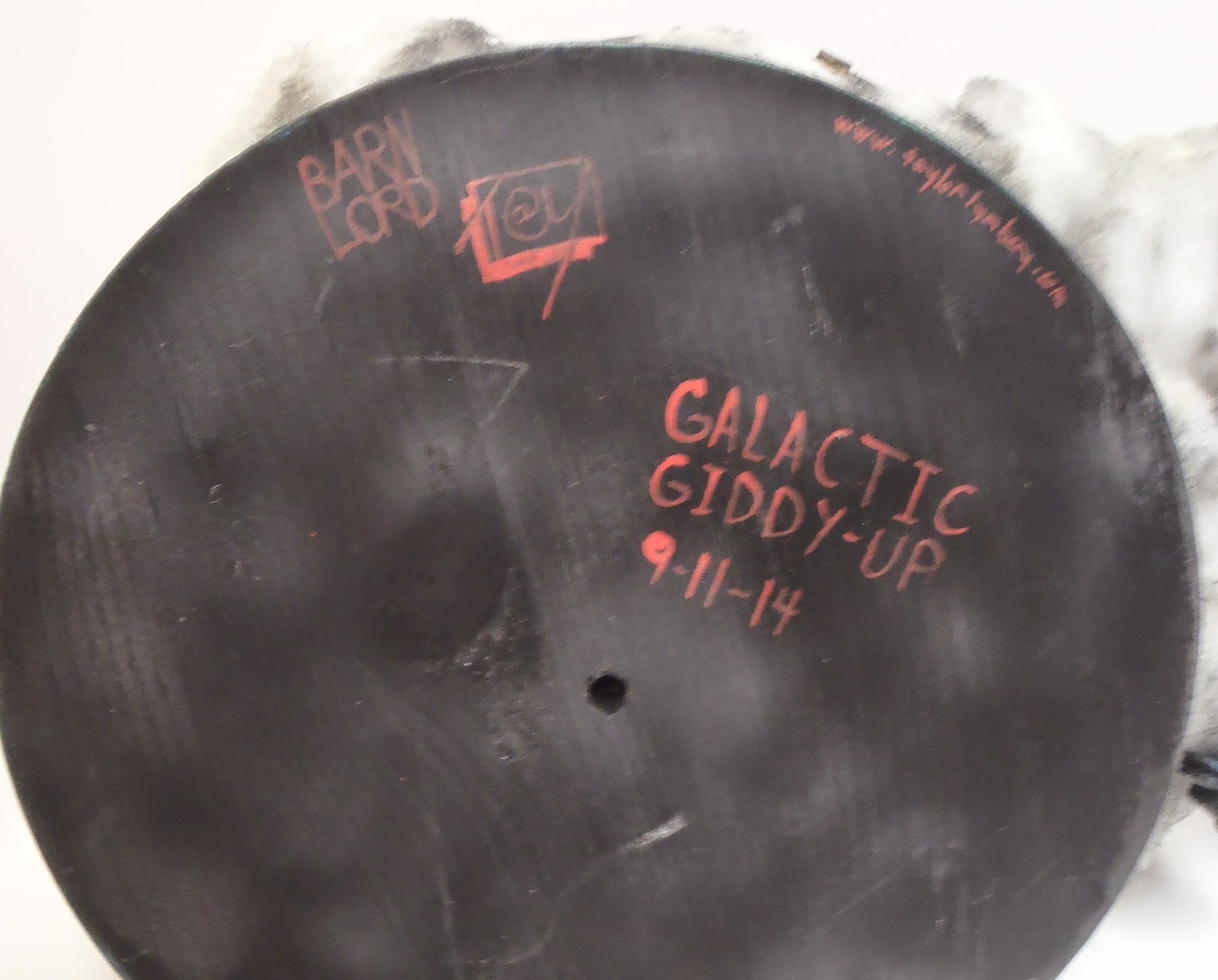 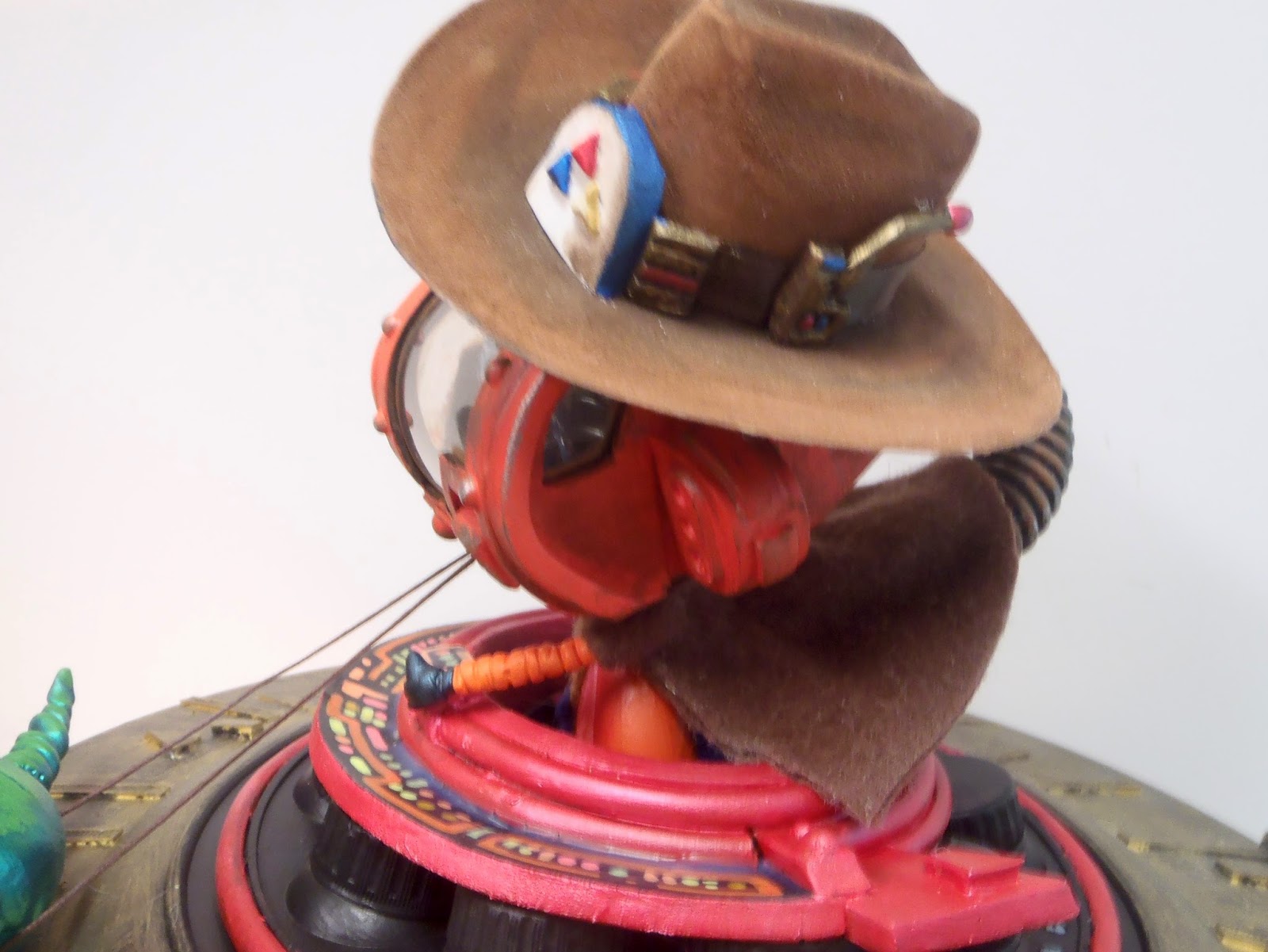 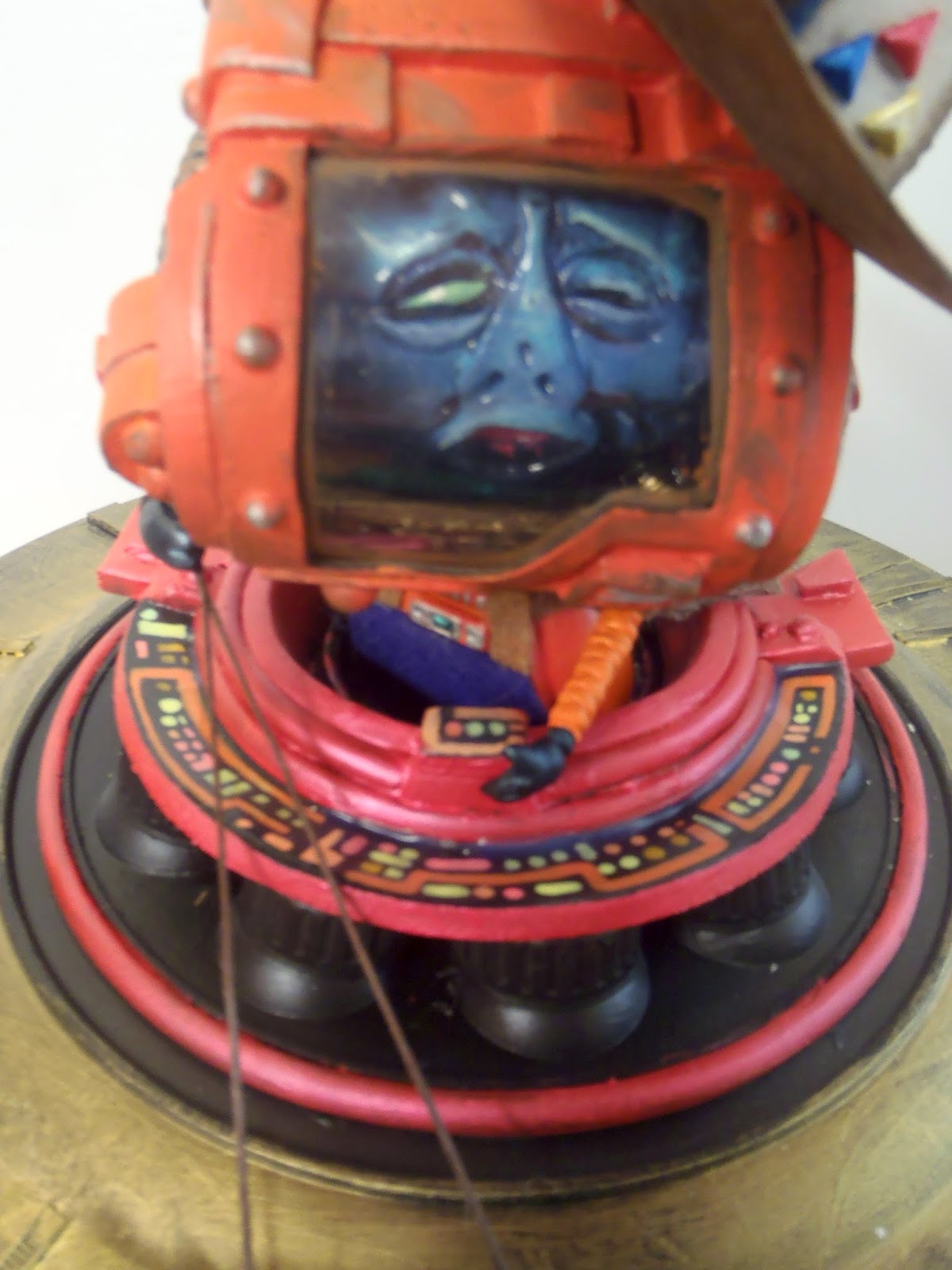 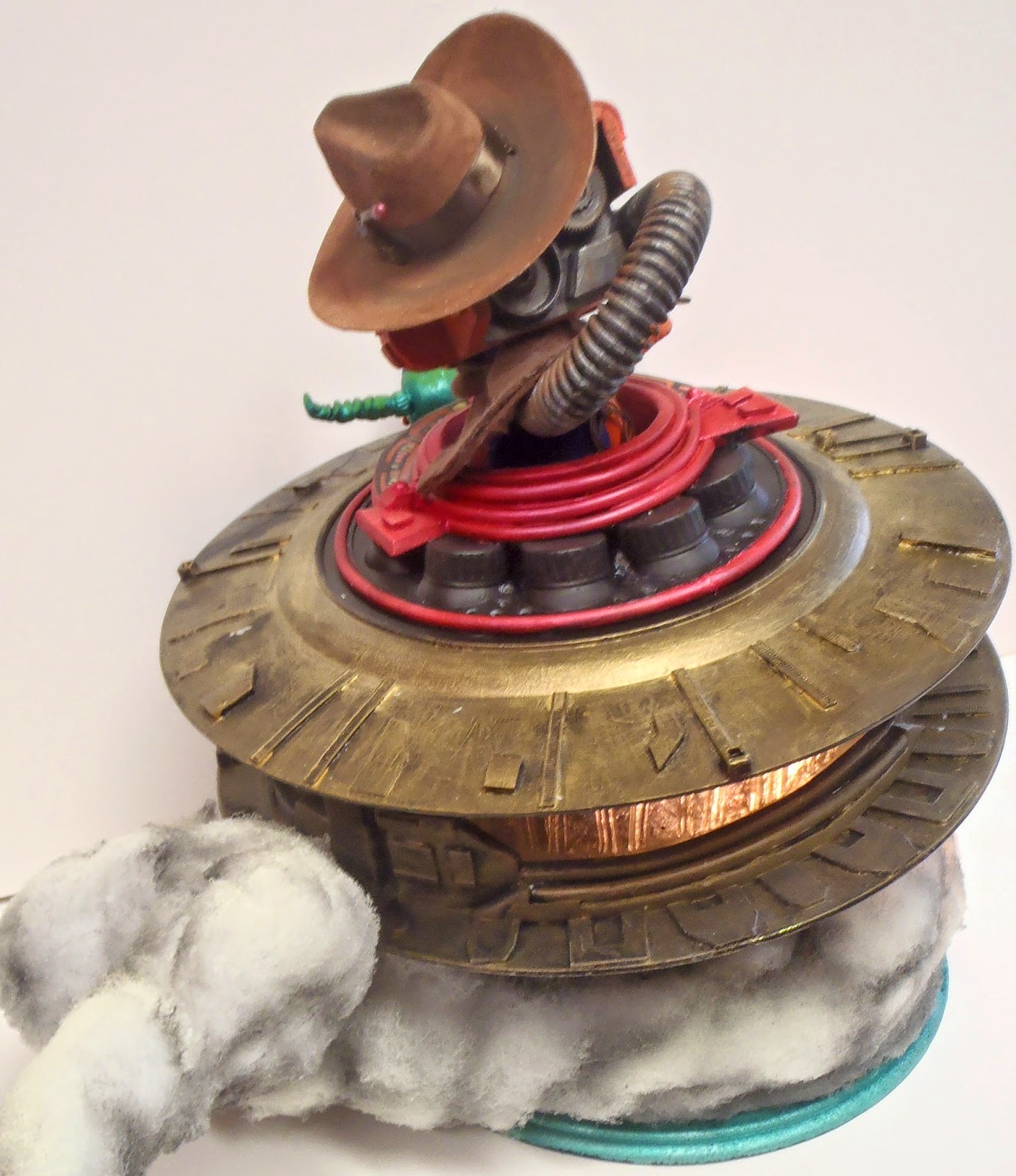 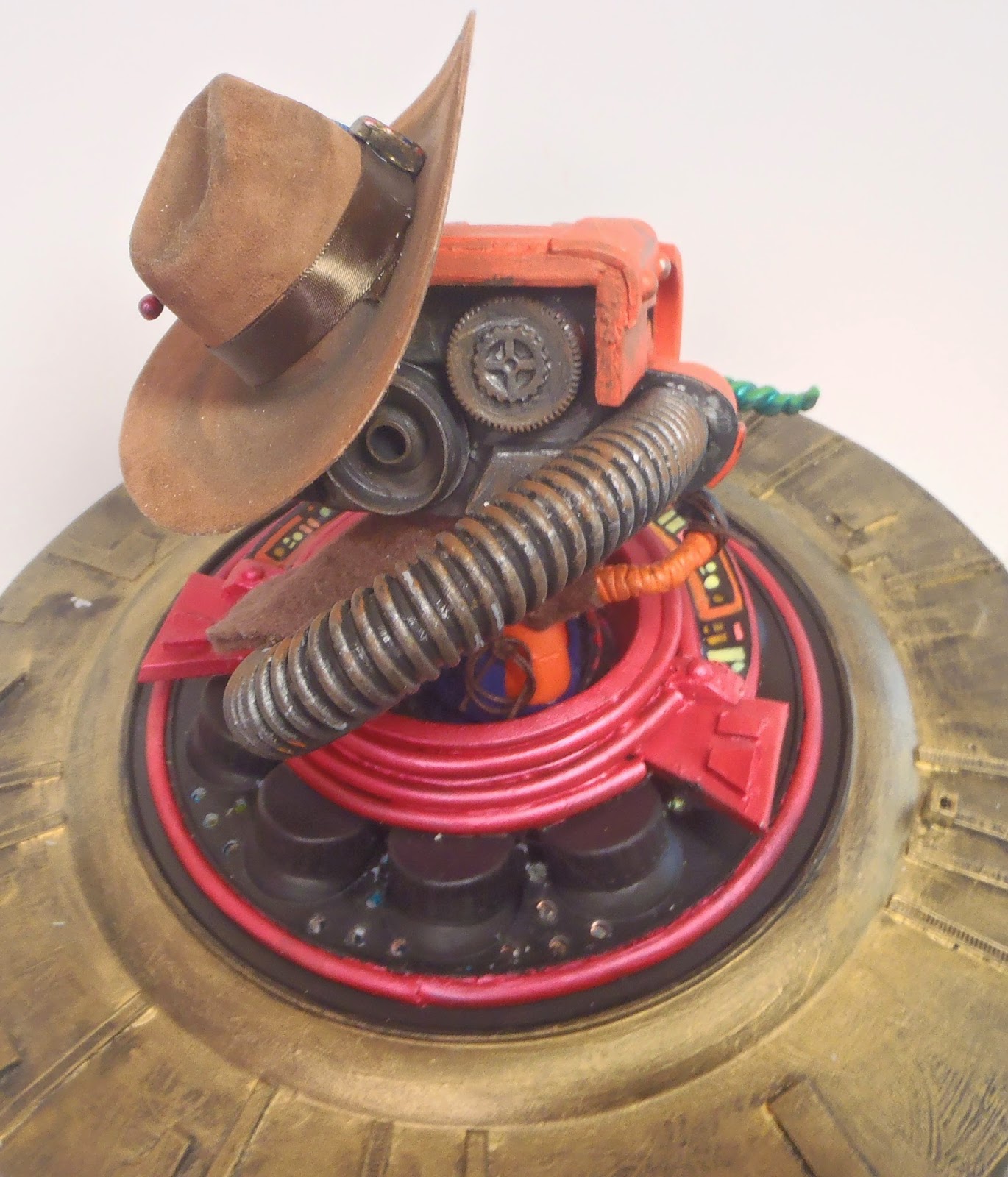 All pictures of "Galactic Giddy-up" custom toy is copyright © Taylor Lymbery 2014. All Rights Reserved. You can see this piece in my deviantart gallery as well here.
Posted by Taylor Lymbery at 10:24 AM