Ok, so here's the breakdown on the Faceless one! So the Faceless one is a character that was exclusive to the 200X or MYP Series that aired between 2002-2004. He looked like this on the series. He is the father of Evil Lyn, as the series has pointed out and continues to be her father as well as a new background written for him stating that he was once a part of the Council of Elders.  Here is his new bio:

The Faceless One™ Bio

Real Name: Nikolas Powers™
As the ruler of Zalesia™, Nikolas Powers™ was entrusted by King Grayskull™ to guard the city’s great magical objects - the Havoc Staff and the mystical Ram Stone. Powers was a core member of Grayskull’s Council Of Elders, great mages from across Eternia® who had the wisdom to tap into the planet’s hidden magical secrets. But by marrying and having a daughter, he broke the Elder’s treaty with King Hssss™ to not produce any heirs. Powers was stripped of his humanity, condemned to never leave Zalesia™ and forced to watch his beloved city destroyed by Serpos. Now called “The Faceless One™,” he asked the wizard-warrior He-Ro™ to use the power of Central Tower to send his daughter Evelyn into the future. There, with his immortality, he hoped to raise her away from the terror of the Great Wars. 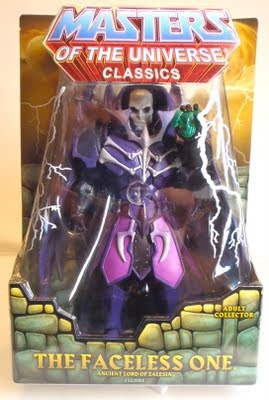 So here's the breakdown. At first sight of this figurine on the forums, I was at first, concerned. I had a fear that this great character would not translate well into the Classics line. As soon as I saw the final paint/sculpt, I was very impressed. I checked out a few pre-order guys doing reviews on him and then I was sold. Some of the things that makes this figurine so very cool is a combination of the new body parts, the new Eternian relics, and the great bio newly written for him. 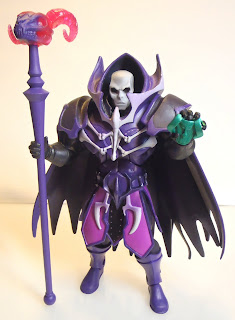 One of the big items that a lot of fans are happy about is the Ram Stone. If you are a fan of the 200X series, you will definitely want this piece. The stone is a green metallic and fits right into The Faceless One's hand. And yes, the hands are a reuse of Count Marzo's hands, so they do have fingernails even though he is supposed to have gloves. I know that a load of fans hated...hated this fact with all of their heart. Honestly, I don't mind it at all. Unless you really focus on it, you really won't notice too much. He sports a new waist/belt/skirt sculpt, which is beautifully detailed. It is not too over detailed as you might expect with 200X and not too dulled down. It has the perfect pairing of detail and simplicity to match all of the other pieces within this Masters of the Universe Classics line. This piece is on the soft side so that his legs are not hindered at all for posing articulation with the legs. My one complaint is the cowl/sholder pad/ cape piece. This piece is going to limit the range of how much you can pose his arms and head.  The whole piece comes off so you can reach his head in order to pose, but it is really difficult to reach whilst he has the cape on. But that's not my complaint. My complaint is this, the cape piece sits a little lose on him. I would almost wish that he had a peg that inserted itself into the torso of the figurine. I say this because there have been a couple of times that I have posed my figurine, I felt that the cowl was coming up and covering his face. But that's it! Overall, this toy is a great addition to the Masters of the Universe toy line. I am extremely happy to have him in mine.
Posted by Taylor Lymbery at 8:04 PM