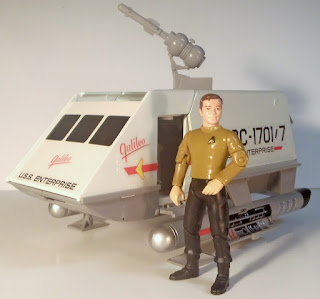 I'll go ahead and say it, I do not collect a lot of Star Trek toys. I really don't. I have maybe three action figures from the playmates line and one vehicle. The Shuttlecraft Galileo and Kirk are the one figure and one vehicle that make up half of that collection. I normally wouldn't go out of the way to talk about a Star Trek toy from Playmates except for this toy combo. And, seeing as this is my second time to own this set, I believe that there is something special about it that definitely warrants a viewing. So, let's take a look at it.

This set not only has classic Kirk, but has Kirk in his away team sweater. This is the only time you will get this version of Captain Kirk in the Playmates Star Trek toy line. If you can find the away team Spock that is just like this action figure instead in blue and with a new head sculpt, you are set for a shuttlecraft crew.  Like most of the Playmates Star Trek action figures, this version of Kirk has standard articulation. He didn't come with any accessories, unless you count the shuttlecraft. But we are not really here to talk about the Kirk action figure as much as we are here to talk about the Shuttlecraft Galileo itself. This is a truly wonderful toy! I had this vehicle back when it hit shelfs in the late 90's. I sold it in a garage sell and regretted it for years. I ended up getting another as a birthday gift many years later. Ever since I got this toy back in my hands, I have refused to give it up. Again, it is that cool. 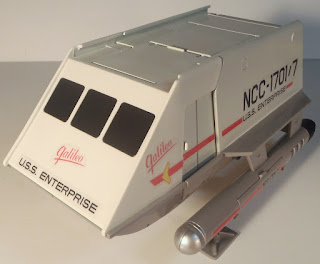 If you look at the scale of Kirk to the shuttle, you can see that the scale is way off. This shuttle has no electronic sound or lights like the other shuttles in the line. So, what makes this thing so good? It is the design. Plain, simple, concise is what this toy is. It has playable options that are hidden behind doors and uses all available space within the toy to seat two characters. It has a two part opening back bay door. It has two opening maintenance doors to repair the nacelles. It has a phaser door to reveal the weapons bank, a two part opening pilot door, moveable chairs, an opening nose door to the cockpit and a detachable spring loaded firing canon! All of that is included in a toy that is really no longer than 12 inches; and... and it comes with a Captain Kirk action figure! 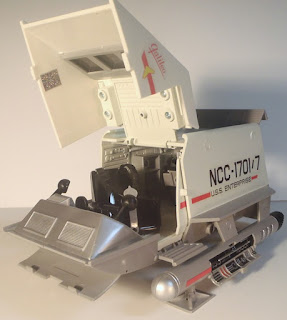 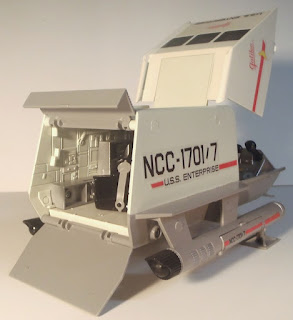 Apart from all of the moving parts, this toy has a nice sculpt to it. If you open all of the doors on this thing and look inside, you will notice a lot of cabin detail inside. I also like the sticker decals that are added to this toy. It is not overkill, but enough to decorate this ship and make it special. I am having a hard time finding any fault with this toy. If you are in the market to get the shuttlecraft, there are a few on the amazon market place to buy. Here is a listing for it:

Give us a like! And, if you like what we have, be sure to tell your friends! We need your word of mouth to help us keep making shows!
Posted by Taylor Lymbery at 5:22 AM